In case you missed the VP debate (SNL version)...

Quick update on my fuzzy brain before we talk about politics.  Praise God, I am SO much better!  I took the last dose of the devil medicine on Sunday evening.  As soon as I started decreasing the dosage last week, I saw immediate improvement.  With God's help, through some wonderful suggestions of a friend, I also found a way to deal with the ongoing dizziness, nausea, etc. that went along with the "detoxing" process.  While I can still feel some residual effects, I am 90% back to normal.  Feeling horrible for a month really makes you appreciate feeling good, and I am indeed grateful.  Thank you to all of you who asked me how I was doing and told me that you were praying for me.  God has used many of you to wrap me in His arms and remind me that I am loved and that He is on my side. Watch out though, as the fog has lifted, my family has been laughing at my comparative giddiness and energy level!  I'm back!

Enough of that....how about my man Obama last night?!?!?!  Because of some ugly weather last night, the rehearsal that I was supposed to attend was cancelled and I got to spend 4 + hours watching election coverage on MSNBC last night!  I was in heaven!  Because I love all of this so much and because I couldn't read very well for several weeks, I have watched A LOT of coverage of this primary process and I feel like all the gang at MSNBC are my pals.  It cracks me up to see them fall all over themselves about the exit polls after the polls close on these primary/ caucus nights.  Have you ever been part of an exit poll?  Have you ever seen anyone asking questions for the famed exit polls?  I want to be in an exit poll!!!

It was a privilege and an honor to go vote yesterday morning.  I got tears in my eyes as I stood in line at my daughter's middle school to wait my turn to vote.  I have never paid that much attention to the primaries before and, living in Virginia, my vote as a Democrat has never really amounted to much more than a symbolic act of my rights before now.  I was humbled by the realization that much of the world does not have the right to engage in the process of choosing their leaders.  Whatever happens in the coming months, this process is still honorable and it matters that we participate.  It mattered that I got to finally say "Yes We Can" with my vote.

I watched Senator Obama speak last night.  He was in Wisconsin, campaigning for the race there next week.  As always, I was moved by his eloquence and his insistence that we not give in to cynicism.  He said "cynicism is a weak kind of wisdom."  The definition for cynicism is this: "an attitude of scornful or jaded negativity, especially a general distrust of the integrity or professed motives of others."  Isn't that exactly how many people have come to feel about politicians?  Isn't that indeed how many of us have come to feel about our government?

Cynicism is not my natural state.  My DNA leans more towards optimism and hope...a "glass half full" view of the world.  Yet, years of watching how special interests and lobbyists have ruled Washington, D.C. can darken even the rosiest colored glasses.  Senator Obama, it seems to me, offers us a different choice.  By refusing to take money from political action committees and lobbyists, by refusing to engage in the politics of negativity and personal attacks, by releasing his personal tax returns and being transparent about who he is, he is rising above politics as usual.  His brand of hope based on raising our expectations, and dreams realized through hard work and opportunity resonate with me and apparently, with many others.  He is a visionary leader, with a unique ability to communicate his vision for change and motivate others to participate in the process.  Can you tell that I am fired up?

Perhaps I love Senator Obama so much because he gives me an excuse to set aside the cynicism that feels so against my nature.  Perhaps we are, as one friend suggested, "being over-promised."  Perhaps all of us who choose to suspend our cynicism and believe that change might really be possible after all will just look like fools in the end.  Naive, trusting lemmings following a charismatic charlatan down the yellow brick road of false hope and unattainable dreams.  Dreams of a government where the two parties treat one another with respect as they debate and problem-solve their way to creative solutions and bigger ideas.  Dreams of a leader who, instead of villifying those who disagree with him, chooses to listen.  Dreams of a government who, as John Edwards continues to remind us, hears the voices of those amongst us who have the least and need the most.  Big dreams requiring much hard work and exceptional leadership.

Today, I am choosing to go ahead and suspend my cynicism and take the risk of looking the fool for buying what Senator Obama is selling. I choose not to settle for the status quo.  I choose to believe that we can do better.  I am excited about this election and I look forward to volunteering for the campaign once Footloose is over (I'll update you on that in a future post.)  I would love to hear what others think.  All opinions are welcome here! 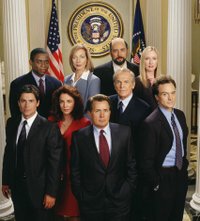 I am in mourning today.  My all-time favorite tv show aired its series finale last night...West Wing is over after 7 wonderful seasons.  I never missed an episode.  I loved the characters and I was fascinated by the inside peek at what governing might be like.  In a pretend letter to 'West Wing's' President Bartlet, columnist Frazier Moore described what I loved most about this show:

"A weekly display of intellect, wit, conscience and high drama, it has explored possibilities for statesmanship that seem rare in the real corridors of power."

While talking about the important issues of the day, West Wing never talked down to us...the dialogue was fast-paced and you had to pay close attention to keep up.  Unlike most of the fare available during prime time, West Wing required that you participate intellectually as well as emotionally if you wanted to get the most enjoyment out of viewing.  No easy answers were offered for the difficult challenges our leaders face, but often good questions were raised.   In fact, some weeks the issues raised inspired me to try to learn more about a particular topic.  This season's campaign and election drama between characters played by Jimmy Smits and Alan Alda were, in my opinion, some of the best of West Wing's 7 year run.  Both candidates fought hard, but with honor, humility and respect for the privilege of serving.  In his article about the end of West Wing, Stuart Levine gave voice to the way that this show appealed to the idealist in me:

“West Wing” taught us that, despite the mudslinging that can create a stench in Washington, politics can remain a noble profession. The selfless men and women who serve do so not out of ego, but out of wanting to make government both a beacon and a safety net for the benefit of others.

So, thank you President Bartlet, Mrs. Bartlet, Toby, Josh, Leo, Sam, Will, C.J. Donna, Charlie, President-Elect Santos, Arnie, and all the rest, it was a great ride and I will miss you!!