It seems like it has been forever since I have posted an entry here on my blog.  2007 has started rather oddly for me and it seems my lesson du jour has something to do with waiting.

Shortly after Christmas, I began having some health problems that have continued into the new year.  If I am honest with myself, these issues have actually been around much longer than that.  I have seen more medical professionals in 2007 than I saw in the entire year of 2006.  I don't particularly like going to doctors (who does?) but, when I do, I want answers...now.  Like most Americans, I am interested in the quick fix.  Just write me a prescription and make it go away.  Yet, like much of life, it doesn't always work like that.  We have tested and waited....tested some more and waited some more...  Now, even though we still have no definitive answers, I seem to be getting better.  While I have some suspicions about other contributions to my improved health, I know it is in large measure due to the prayers of people who love me and the God of healing whom we serve.

So, what have I learned from this past month?  That patience is not one of my virtues.  That I am grumpy when I don't feel well.  That I tend to isolate myself when I am struggling.  That I don't like to admit that I am not doing OK.  That I prefer to pray for others than to ask for prayer.  That I have incredible admiration for people who suffer years of chronic health issues when I get whiny after one little month.  That it sucks getting older...ok, not really....I actually like getting older in so many ways...just not in the "my body is falling apart" way.

On the other hand, I have also learned some other things.  That I can be pretty tough when I decide to fight.  That I couldn't make it without my girlfriends, my family and my church family.  That my husband truly is my knight in shining armour.  That a lot of people have it WAY worse than me and therefore, I have no room in my life for self-pity.  That even when times get a little bit tough, life goes on and there is joy in even the hard days.  That laughter and humor are indeed the best medicines, especially when it's not funny.  That God ALWAYS provides what I need, even when I don't know what I need or how to ask for it.

As I said, I'm MUCH better and I suspect we are over the worst of it.  In the meantime, in an effort to combat my apparent physical decline into the aches and pains of middle age, I have gone on the offensive by implementing some positive new health habits.  I have been exercising regularly and eating better.  I believe in the connection between our mental health and our physical health, so I am looking at the ways that I care for myself emotionally as well.  For me, in the last year or so, that means doing some writing...so here I am again!  I am going to try to start writing regularly again....I miss my blogging!

It seems to me that is exactly what we are doing in Iraq.  We are working harder than the person with the problem.  Consequently, there is no reason for the Iraqis to make any changes.  In this instance, however, the consequences are more serious than resentment and frustration.  Over 3,000 of our brave young and men have died, thousands more have been horribly wounded.  Now we are sending more troops into harm's way.  It makes me so sad.

I listened hopefully to the President the other night.  I prayed for him as he spoke.  I was hopeful that he would lay down some firm boundaries for the Iraqi people.  Perhaps he did to some degree.  What I didn't hear was what would happen if the Iraqis don't do their part.  Sticking with my previous analogy, any intervention should include the following: here is the problem, here is what you need to do, here is what we will do, AND here is what will happen if you don't do your part.  The last part is the muscle, the "change-maker" and, it seems to me, that is the part that is missing.  Unfortunately, we are gambling the lives of our brave young men and women that the Iraqis care as much about change as we do.

The part of this that scares me the most is how President Bush seems to, once again, be going it alone.  His own party is even abandoning him now.  These words yesterday from Senator Chuck Hagel, a REPUBLICAN, haunt me:

I think this speech given last night by this president represents the most dangerous foreign policy blunder in this country since Vietnam if it's carried out.

In an article he wrote in November, Chuck Hagel said the following:

The time for more U.S. troops in Iraq has passed. We do not have more troops to send and, even if we did, they would not bring a resolution to Iraq. Militaries are built to fight and win wars, not bind together failing nations. We are once again learning a very hard lesson in foreign affairs: America cannot impose a democracy on any nation -- regardless of our noble purpose.

We have misunderstood, misread, misplanned and mismanaged our honorable intentions in Iraq with an arrogant self-delusion reminiscent of Vietnam. Honorable intentions are not policies and plans. Iraq belongs to the 25 million Iraqis who live there. They will decide their fate and form of government.

Do the Iraqis even want democracy?  Are they willing to fight for it...to die for it?  I just don't know.  I just know we need to make a decision about how long we are willing to work harder on the problem than the people with the problem.  Seems like everyone in the country except George Bush, bless his heart, is already done.

Grandfather Would Want You To Know 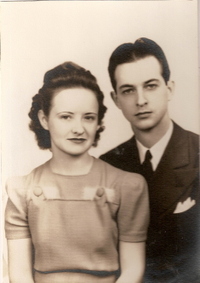 I would ask for your indulgence as I post one more entry on my heritage today.  I've been thinking about doing this post all week and finally had a moment to do so.  The words below seem so appropriate as we consider our goals for the coming new year.  In my last post, I mentioned the "Grandmother Remembers" book that my Grandma completed for me almost 20 years ago.  One of my favorite pages in the book is a page entitled "Grandfather Would Want You To Know" where my Grandpa got the opportunity to offer his thoughts.  Grandpa has only been with Grandma in Heaven for a few years now, but I am sure it was a joyful reunion...they were married over 50 years.  Anyway, consider Grandpa my "guest blogger" today.  I think his words of wisdom bear repeating...here they are in their entirety.

I think you should know that there are a few things that are really important in our lives.  I've listed these that seem important to me- not necessarily in any particular order of importance.

There are more things and ideas I'd like to pass on, but these are some of the important ones.  Remember that a happy life can't be measured in dollars- it is your satisfaction and what you give to others that is important.-- Grandpa

As context for his words, you should know that Grandpa began his working life in a poultry house; dressing chickens, testing cream and driving a truck. At his retirement, he was corporate Vice-President of Sun Oil Company and served on the Board of Directors.  In all the ways the world measures success, he was a success...money, influence, position.  But, more importantly, his life was also successful in the ways God measures success.  He was a devoted husband, father and grandfather, he served his church as an elder, he was a loyal friend to many people.  A hard-working Christian man....a no-nonsense guy.  He seemed a little gruff to me when I was younger, but turned into a real teddy bear in his later years.

Like all of us, he wasn't perfect; but he truly lived the principles that he outlined for me in the words above.  We would be wise to take his words to heart.  When he arrived into the Lord's presence, I have no doubt he heard the words "Well done, good and faithful servant."  Thanks for your words and example, Grandpa...I love you!

Today is my grandmother LaVon's birthday.  She is in Heaven now, but today is the 89th anniversary of her birth.  She died 10 years ago, but I still miss her all the time.

This is my favorite picture of the two of us together. 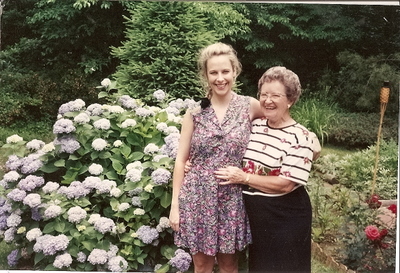 It was taken in June of 1993.  I was several months pregnant with my firstborn, her first great-grandchild, and they had come to visit us here in Virgina.  Grandma and I shared a love of flowers and I had recently begun gardening seriously.  She was completely taken by this hydrangea bush in my yard and very excited about the impending birth of "our" baby, hence the hand on my tummy.  You can see her spirit in the expression on her face.  She loved the color yellow, a "happy" color she once told me.

The smartest thing I have ever done was to give her one of those "Grandmother Remembers" books about 20 years ago.  She completed it in detail and I take it out once or twice a year and read through it.  I read through it again today, on her birthday.  In her familiar handwriting, I find the essence of her captured in its pages.  Her positive can-do attitude, her sense of joy in living, her commitment to family and to God, her pride in her husband, her children and her grand-children all come through in her words and the pictures that she shared with me.

My grandmother and grandfather were of the generation that lived through the Depression.  As I watched President Ford's funeral yesterday, another man of their generation, I couldn't help but think of the lessons they taught us.  I tend to think that Tom Brokaw might be on to something with his "Greatest Generation" designation.  This generation understood gratitude, sacrifice, and service in a way to which many of us can only pay lip service.  My grandparents did not have a perfect life, but they had a very good life....a life lived in service to God, to each other, to their families and to their communities.  Those of their generation, unlike many of the subsequent generations, were not obsessed with more...they understood the value of enough.

Anyway, just thinking about Grandma today.  Remembering her laugh, her applesauce, her sunny disposition, her clematis, her african violets, her tendency to say exactly what she was thinking without much filter :-)...and how very much she loved me.  I'm sure all the grandchildren felt this way, but I always felt like she delighted in me.  I love it when the bible says that God DELIGHTs in us...isn't that a great word?  I want my kids to learn what it feels like to have someone delight in them from me....just like I learned it from my mom and my dear, sweet Grandma.  I can't wait to see you someday, Grandma!  Happy Birthday!