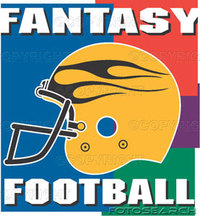 Now that the elections are over and I am down to watching Hardball only a couple of times a week (instead of a couple of times a day,) I can begin to concentrate on some of the really important things in life.  For instance, my fantasy football team.

No, really, I have a fantasy football team....but I'm getting ahead of myself.  This all started for our family last year when a group of men from our church decided that fantasy football would be a wonderful "fellowship" opportunity.  So, they began a league, invited a few guys over for pizza and beer, and staged a football draft.  My husband, who is the type that used to dread the whole "greet your neighbor" part of the worship service, got talked into participating by the "Commissioner" of the league (who he deemed somewhat trustworthy, primarily because he is a golfer.)  They gave their teams biblical names (no, really, they did...Lions of Judah, Sons of Thunder....that sort of thing) and they battled one another throughout the 2005 football season.  For those of you who are unfamiliar with this process, you play other members of your league on a week to week basis with a "team" of real football players from the NFL.  You might have New England's QB, the Cowboys running back, etc. etc.

During that first season, an amazing thing began to happen.  Suddenly, I was the one trying to drag my husband out of church on Sundays because he is talking to his friends....instead of the other way around.  Of course, they are talking about football, instead of important things like my friends and I discuss at church (like where we got those awesome boots, etc.)   Fast forward to this fall and you find Steve hosting the football draft at our house this year...complete with a fancy draft board that he purchased for the occasion.  All joking aside, he really has gotten to know more of the guys at church through this fantasy football league than anything else we have done in the 9 years we have been part of this church.  He has played golf and gone out for beers with some of these guys, largely because of the connections that began through playing fantasy football.

My step-dad sent me the link to this article a few weeks ago.  It is about a new movement called GodMen...here is an excerpt from the article:

The event was the first of what Stine and other organizers hope will be a series of testosterone-fueled Christian men’s gatherings across the country. Their purpose: to reassert masculinity within a church structure that they say has been weakened by feminization. They call it an experiment for now and don't expect, or even want, their numbers to grow too quickly. Stine and his friend and manager Mike Smith dreamed up GodMen after reading David Murrow’s 2005 book, “Why Men Hate Going to Church.” In it, Murrow points out that on any given Sunday, 13 million more adult women than men attend church in America. “We have to find a way to give [men] something that matters to them,” says Stine.

The article goes on to suggest a gathering that sounds more than a little silly to me.  My blogging friend Matt read the same article and also found it "gimmicky."  However, as the excerpt above notes, there is probably a great deal of truth to the concern that motivates these men to try something new.  Men and women are wired differently and they get excited, motivated, energized by different things.  Ministries that are intended to draw in the men of the church can't be carbon copies of the women's ministries.  I am not going to pretend to understand the male psyche; I just know what I see.  Maybe these GodMen types have it all figured out...I would love to hear what the rest of you guys think about GodMen!

Anyway, enough about you men, let's get back to me :-)  I followed along with the fantasy football week by week last year and thought the whole thing was GREAT fun.  So much so that I decided that I wanted to have a team this year.  Because I knew better than to try to break into the boy's club at church, I joined my brother and sister-in-law's league.  Unlike the group at church, our team names all have to do with 80s rock bands.  My team's name is Twisted Sister and I am having a perfectly awful season.  I am currently 3- 7 and have been beaten soundly by my brother, my sister and my sister-in-law.  It is humiliating and an absolute blast!  My husband and I have so much fun every week checking on how our teams are doing and trading information....ok, I am primarily getting information from him.  While I love football and have a reasonable understanding of how it is played, I did choose Tom Brady as my quarterback primarily because he is SO darling.  Is that wrong?

Ok, so here is the question, why do men often have to have something to DO to hang out with their friends?  We women can just get together and talk; why do many men (don't want to generalize too badly here) need an activity to organize their "fellowship?"  In your opinion, is this generalization even accurate?

I can't BELIEVE you have a fantasy football team!!
ok---choking, and joking aside...
I agree with your assertion-
in the time that I have worked at my job, I have noticed that the guys I work with have to have an organized activity to bring them all together in order to all hang out outside of work--other wise I guess it's weird or something...whereas I made 2 of my best friends at work and I don't know that we ever had specific plans---let's just hang out :)
Fellowship means different things to different people, men and women-
I think it's awesome that Steve has found what fellowship means to him and his friends and they can grow in that.
As for GodMen--I mistrust any organization that sets about to get people "revved up" and admonishes balance---I agree men need to be men, eat red red meat, set off fireworks on days not 4th of July, work on cars, but all guys are not going to respond to that kind of thing...The GodMen are based out of Nashville, though, which is a note that cannot be overlooked-Nashville is famous for it's grandious productions ala LA style to reach folks, without thinking of the long-term everyday. It's the Disneyland approach--give them a magical day of high and then send them back to consumerland to keep buying the product (sorry--did I say that out loud?)

Nonsense! It may appeal to some people but not me, not most of the men I know. It's not a slick production full of testosterone we want, we get that all the time, on the golf course, at football games etc.
No, when men say the church is for sissies we are saying that it's not real, its not a safe place to express how we really feel. It doesn't reflect who we are and what we struggle with.
Some may say its been feminized but that's a really sexist comment. What's really happened is we have cheapened the gospel into self-help. That's not feminizing the gospel, that's changing the gospel. Men and women alike, will respond to the real gospel, but men will be the first to run a mile from touchy feely self help therapy.

Fantasy football is indeed addictive -- I've been a member of two leagues for a number of years (this is my tenth season in one of them), and I still love it. The only drawback is that I find myself rooting against my favorite teams because their opponent has one or more players in my lineup that week. And when you're boasting a 4-6 record in one league and a 2-8 in the other, the rewards aren't that great.

As far as your final question, I hadn't actually thought about it before. It's a 50-50 deal with me; one the one hand, I love getting out on the golf course and hanging out with some of my guy friends. At other times, I prefer a few beers and some good conversation. Just depends on the mood and our schedules -- and since so many of us have kids now, they are often very impromptu gatherings.

And I can't help but comment on one thing Emy said about guys working on cars -- I definitely don't fall into that category; in fact, I'm lucky I can find the battery. Now, if guys can hang around near a car, then I'm your man!!

I drive a KIA, cars mean nothing to me at all.

I don't relate to the article personally, but I suspect it does appeal to a certain segment of men.

I had not thought about the bigger questions before (men and church; men and socializing). But truthfully (and sadly), I believe most men are functioning on a lower level of Maslow's hierarchy than women, namely the survival level. The responsibility for "providing" for family needs has been the domain of men in our culture. This has enabled women to move up a rung (or two) on Maslow's hierarchy of needs. I also think the responsibility of "providing" has a component of "control" that injects itself into men's psyche. Church, a relationship with God, and the act of following Christ is all about giving up control, which is hard for me, and men in general I believe.

Another data point: I recall my college daze when we guys would just get together to talk. After I got married and started working full-time, my desire and need for hanging with the guys -- just to talk-- went down radically. And has remained low ever since.

Thanks for posing this thought provoking question.

The comments to this entry are closed.